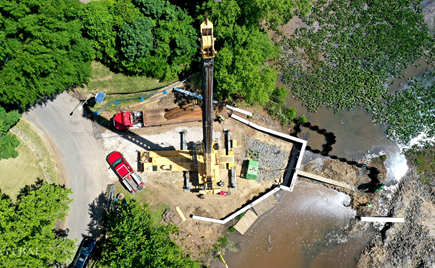 Buttonwood Dam failed after a severe rain event on April 30, 2014.  Environmental Resolutions, Inc was responsible for completing the design and permitting required to remove the failed dam structure and to stabilize the area.  ERI was responsible for creating a design plan to construct a low flow open channel with rip rap liner in place of the removed infrastructure for Phase I of the project. ERI completed a hydrologic and hydraulic analysis for use in the design of the stabilized open channel.  Phase II of the project involved the preparation of a design plan to reconstruct the previously failed dam infrastructure and to complete dredging of the upstream lake.  ERI completed site improvement and permitting plans for the dam reconstruction and dredging of the lake including a subsurface investigation of lake sediment and testing of contaminants of concern.  A hydrologic and hydraulic analysis was completed to determine the spillway design of the new dam structure to evaluate impacts as a result of a dam breach in accordance with N.J.A.C. 7:20. ERI completed and submitted permits to the state for Freshwater Wetlands, Flood Hazard Area, Dam Construction, and Water Lowering for approval.  Due to current budget constraints, the dredging will be performed at a later date.

In addition, ERI was responsible for facilitating the permits associated with the project.  The Phase II design was reviewed and approved by the Bureau of Dam Safety and Division of Land Use.